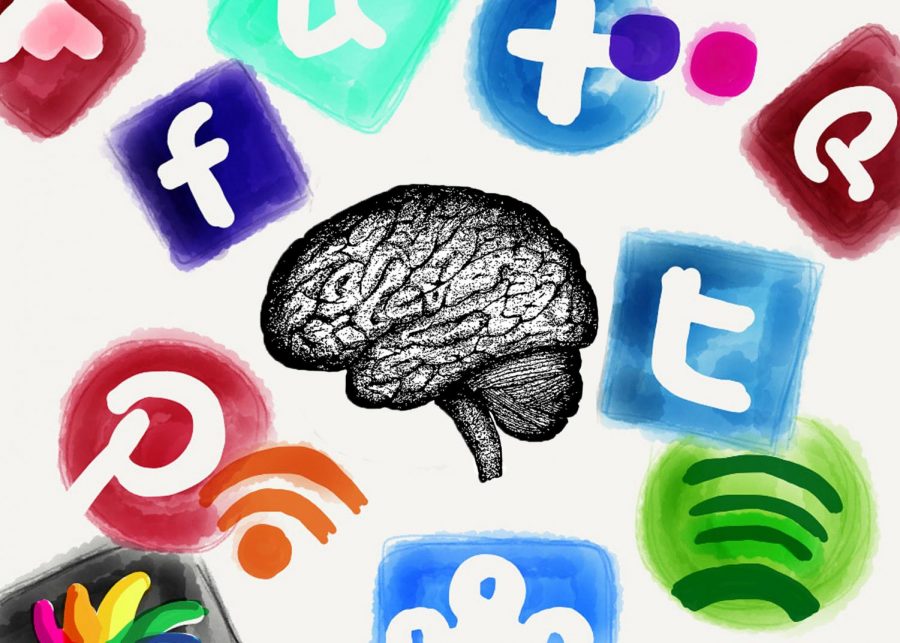 Social media plays a part in revealing the humor coping mechanisms of Gen Z. (Photos labeled for reuse with modification on Wikipedia and Flickr.) Photo illustration by Kira Zizzo.

Your finger glides down the sleek, chilling glass surface of your phone as you peruse the wide world of memes. The screen light reflects the delicate curvature of your eye as you comprehend the meme before you. It has the predictable punchline of hating yourself or being human trash, you chuckle, like it, and scroll to the next one, hungry for more, and unknowingly complicit in feeding the popularity self-deprecating humor.

Self-deprecating memes are a way that media is widely spread with the baseline of putting yourself down. This form of humor has grown increasingly in popularity through the use of social media platforms such as Instagram, Twitter, and Tik Tok. The majority of people who use those social media platforms are Gen Z, meaning they were born in the 1990s to the early 2000s. Around 90% of Gen Z uses Instagram at least once a month, according to Marketing Dive. Due to the rapid, constant usage of these media platforms, it increases the spread of content to a wide web of media consumers, mostly Gen Z.

A large amount of the humor and memes presently created and spread are targeted towards and created by those in Gen Z. The vast majority of this content is self-deprecating, where the punchline is hating yourself of finding a negative aspect of yourself to criticize. This type of humor is a thin veil over the chasm of mental health issues ripping apart Gen Z. 91 percent of people in Gen Z between ages 18 and 21 recall that they have experienced at least one physical or emotional symptom due to stress in the past month, which is higher than any rates recorded in history, according to the American Psychological Association (APA). An alarmingly predominant statistic portrays the stress and mental health issues that people in Gen Z are currently facing. The suicide rates in Gen Z are the highest they have ever been, at 22.7%. The main stressors for Gen Z are mass shootings, school, rising suicide rates, climate change, deportation, and sexual harassment. Additionally, nearly three-quarters in this generation say they could have used more emotional support in the past year, according to the APA. As a coping mechanism, Gen Z turns to a widespread form of media, memes. The topic of mental health issues and self-resentment is relatable for many Gen Z social media users, so they collect a plethora of likes and shares, broadening the audience of those viewing these memes, thus escalating the popularity of this humor. The severity of Gen Z mental health issues is portrayed in the self-hatred of the memes they create and share. The supposed lightheartedness of memes and internet humor is a deadly mask for the deep mental issues burdening Gen Z.