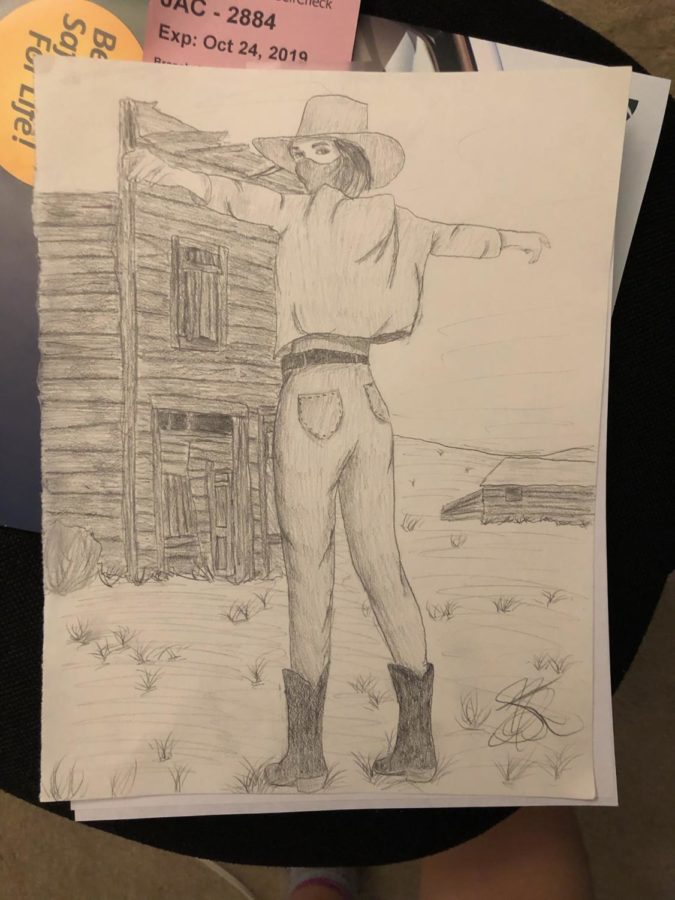 The National Western Stock Show is a celebration of western culture and art. It begins January 7 and ends January 26. It is held at 4655 Humboldt St, Denver. There are rodeo events, an art competition, and even a parade. The art competition is held statewide. Samantha Jacot ‘23 is the only winner picked from Rock Canyon.

“To be honest I didn’t think I would win so I was surprised. I’ve never entered an art show before,” Jacot said.

But this is far from her first work, she runs an Instagram account under the username @bubbly_kat_177 where she posts her artwork. Samantha also explained how she picks what to draw. This particular drawing was based off of a reference image.

“I usually just find a prompt or a person I want to draw… We had a theme, it was Western life. And I drew a person because that’s what I do… I found an image that I liked and put my own spin on it,” Jacot said.

But Art isn’t a quick process. It can take many hours to get a drawing or painting just right. Especially Art for a competition.

“It normally takes an hour to two hours. This one took about an hour and a half,” Jacot said.

Samantha’s drawing was of a cowgirl standing with her arms outstretched and her head turned slightly to the side. Which is no easy task for any artist. The drawing was also based off of a reference image.

“The hands and face were definitely the hardest part to draw,” Jacot said.

Many artists begin their careers later in life such as Grandma Moses, however Samantha began early.

“I began drawing when my parents got divorced, which was about nine years ago. It helps me cope with anxiety,” Jacot said.

Her advice for aspiring artists is simple but works.

“My advice is to practice,” Jacot said.