We’re Going to Miss You “BARRY” Much

Barry Ehmke, RCHS Campus Security Specialist Lead, retired Sept. 30. Learn about his 15 years at the school and what he plans to do in retirement. 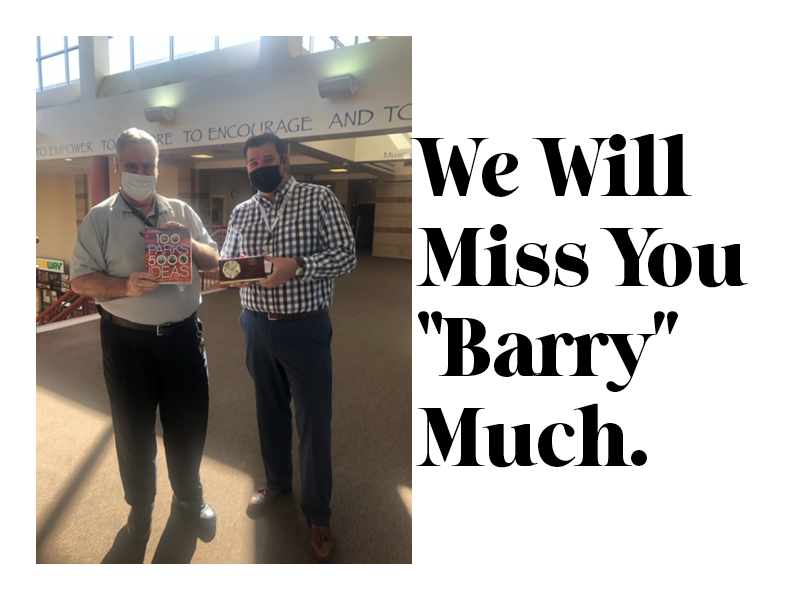 Barry Ehmke, RCHS Campus Security Specialist Lead who has worked at the school for 15 years retired Sept. 30. In addition to being part of the security staff, Ehmke was a member of the Vortex Committee, (a group of security staff, mental health staff, teachers, administrators) and the student resource officer who looked out for students and try to monitor the mental health of the student body.

“[School security guards] don’t have any contact with the kids anymore, and that was the best part of the job,” Ehmke said. “That was what made it fun and made it something that I wanted to do every day. We don’t have that anymore. It kind of just became time to move on and do something different, and for me, that’s traveling.”

Ehmke hopes to travel across America in his RV, visiting each of the 50 states and seeing all of the national parks. He hopes to someday travel internationally as well.

3 Things You Didn’t Know About Ehmke

Ehmke has two golden retrievers, Casey and JT, who are brothers. They are almost seven years old and accompany Ehmke on his camping trips. “I went to buy just one [dog], and when I picked up Casey, JT, his little brother, just cried so much. I said, ‘I can’t separate them,’ so I kept them both so they can have company during the day when I’m working.”
Ehmke is an avid camper and moved to Colorado for its national parks. Ehmke takes Casey and JT in his RV where they have their own beds in the back. “I camp all the time with my dogs… I go to the mountains a lot and go to the national parks around here a lot in the summertime. I used to ski and snowmobile– I’d go up to Rabbit Ears Mountain.”
Ehmke is a history buff. He loves traveling to see national monuments and historical sites throughout America and reading historical fiction. “I love seeing parks that have history to them… I drove from San Diego up to San Francisco, and one of the biggest things I thought was so cool was when you get to San Francisco, [there are] monuments, and you can tell from the different levels how military power increased each time something was built– you start from the Revolutionary War… all the way up to [a] World War II [monument].”

What We’ll Miss About Ehmke

“I think that he is a very compassionate person. I think that Barry was a friend to the students at RCHS. He was a very kind and caring man, and every time that I would see him, he would always be interacting positively with the student body, which I think really impacts students’ days because a positive interaction with an adult can really give someone confidence, especially if [he or she] is new to the school,” Izzy Holsman ‘21 said.

“You don’t get people who stay in these types of positions for that long; you don’t find people who have been in their job for 15 years anywhere. He’s been able to make a lot of connections with students. He’s a very unique individual, and he will be missed,” Assistant Principal Gregg Sheehan said.

“He likes reaching out to kids, connecting to kids. He always has kids he kind of looks out for, and that’s really nice that there are eyes on kids when they’re out in the halls who might be in need or need support. He’s a great cook; he used to bring in these fabulous things for us to eat. Sometimes it was these really big stews. He does good soups and stews and bread. He’s quite the chef,” Professional Learning Specialist Sarah Pasco said.

Thank you, Ehmke, for all you have brought to RCHS throughout the years. We wish you the best and will miss you in the halls! Once a jag, always a jag. #rcfamily

Update as of Oct. 1: Chazz Burney will replace Ehmke as the new security lead for school.