A semi-spoiler free review of the 2020 comedy, "Eurovision Song Contest: the Story of Fire Saga" 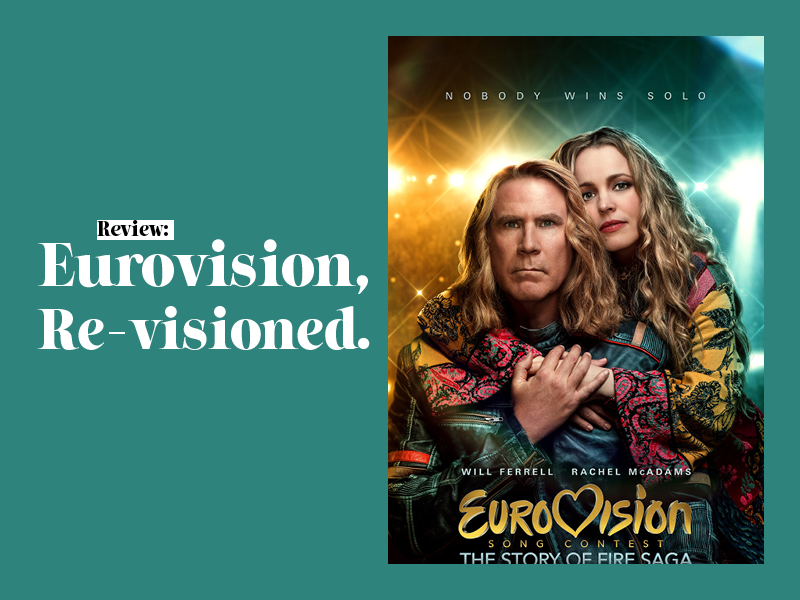 The movie poster from "Eurovision Song Contest: The Story of Fire Saga" from Wikipedia (image labeled for fair use)

“Eurovision Song Contest: The Story of Fire Saga” is a story about two Icelandic singers, Lars Erickssong (Will Ferrell) and Sigrit Ericksdóttir (Rachel McAdams), who form a band called Fire Saga, and enter to join the EuroVision song contest and represent their country. They go through a preliminary stage where they face off against the other bands from Iceland. The band is able to get past that stage from an unforeseen event allowing them to move on.

After being chosen to represent Iceland, the film goes through their experiences with other countries’ singers while in the hosting city, Edinburgh, Scotland. The pair is put through an immense amount of problems, and become friends with the favor of the contest, Russian singer Alexander Lemtov (Dan Stevens). They go to a party at Lemtovs’ castle and end up losing each other at the party. The next morning, they get back together and head to the semifinals of the contest, and it goes well, but they have a problem when part of Sigrits’ costume gets stuck in a large hamster wheel that is part of their performance.

Believing they had no chance of winning, Lars leaves, and catches a plane back to Iceland. Fire Saga, (Sigrit and Lars, or Ferrell and McAdams) was actually voted to the finals, and Lars finds his father in Iceland, hearing from a man that Fire Saga had made it. He is stopped by Victor Karlosson, who is the Governor of the Central bank of Iceland, and one of the main characters involved in the song contest and Irelands’ choice, he tries to kill Lars because he says Iceland is broke and cannot afford to host the contest if Fire Saga were to win. Lars manages to escape and makes it to the competition just in time, and plays a different song than previously planned, leading up to their disqualification.

This musical-comedy is a great film for people wanting to see Will Ferrell in a good movie other than Step Brothers or Elf. According to the Hollywood Foreign Press Association, Ferrell got the idea for this movie in 1998, while on a trip in Sweden with his wife. Knowing he is a comedian, it’s no wonder this movie is so funny, it had hints of magic, mystery, romance, and the comedy you would expect from a movie written by Ferrell. It ranges from elves in the mountains to one of the band members being in love with the other.

The idea for this movie is 20 years in the making, and using todays’ technology and writing styles made this a movie worth waiting for (though no one knew it was happening for the majority of the time). The film appeals to the general audience, anyone can watch this movie and enjoy it, as it shows heartfelt emotions in all of the characters through the singing and dialogue throughout the movie. The special effects in this film are okay, while the green screen is very good, you can’t tell at all that the majority of the arena and stage is a green screen throughout the film, but the whales when they are in Iceland are very easily distinguishable from real and fake, they look unnatural and don’t move smoothly.

The acting in the film is overall decent, Will Ferrell is a veteran, and does a great job at portraying Lars, and even sings his own parts in the songs we hear. The rest of the cast are relatively solid as well, Rachel McAdams did an excellent job as Sigrit, and although lip syncing may seem easy, it is not as simple as it seems, as she had to lip sync under a Swedish singer, My Marianne. The film overall is a fun and enjoyable watch, and is definitely worth watching if you are a fan of comedy, and fake accents.