Digging Through the Mess of the First Presidential Debate

Take a look at some of the most important political takeaways from Tuesday night’s debate in the midst of the shouting, arguing, and hysteria. 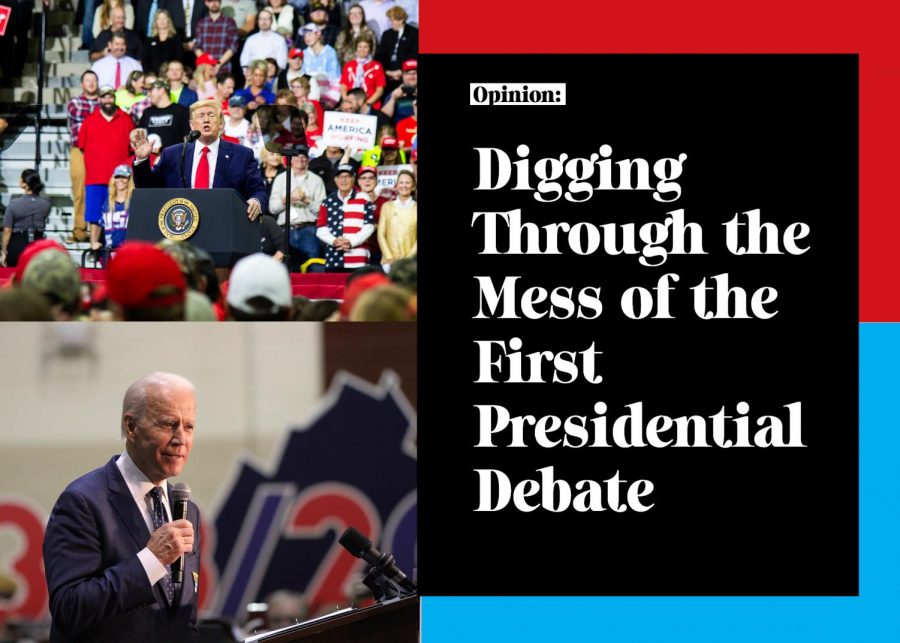 The very evening that was intended to inspire and uplift the American people prior to the 2020 election season proved to be nothing short of a catastrophe. Tuesday night marked the First Presidential Debate between President Donald Trump and former Vice President Joe Biden at the Samson Pavilion in Cleveland, Ohio.

An evening intended for civil discussion between the two candidates regarding their visions for the future and outlines for new policies quickly escalated into a personal affair in which the candidates insulted each other personally and yelled over one another for nearly two full hours.

What are registered American voters supposed to take away from this night, the idea that they may be doomed either way? Only time will tell, but for now, here is a compilation of the actual politics I took away from each of Tuesday night’s topics from the ABC airing of the debate (note that questions and answers are paraphrased).

Trump: He stated that in logical terms, his victory in the 2016 election provides him the power to appoint the newest justice, and he believes that a democratic President would have made a similar decision to his given the opportunity. Trump expressed his respect and high expectations of Coney Barrett if she were to become the newest justice.

Biden: He stated that Trump stripped the right of a say in the newest justice from the American people. With a new election season in progress, the winner of November’s election should be allowed to appoint the newest justice, making President Trump’s actions selfish and immoral.

Notes from the Open Discussion: Biden expresses his belief that Trump is trying to undo the infamous Roe v. Wade ruling, while Trump says that there is no evidence to validate such a claim. He continues by saying that his appointing of Coney Barrett can not be used as evidence solely because she is a Republican, and her viewpoints on the matter can not be assumed.

Two Minute “Uninterrupted” Question: With 7 million cases and 200,000 deaths due to the Coronavirus outbreak in the United States alone, why should each candidate be trusted by the public to lead them through the pandemic?

Trump: He argues that the Chinese origins of the virus mean that the outbreak should be blamed mostly on China. He suggests that progress on a vaccine and stunting the growth of the virus over the last several months can be partially credited to him. Trump says that the President will always receive “bad press” and that “fake news” will force the blame onto him no matter how good of a job he possibly does.

Biden: He leads by providing the statistics from the American outbreaks, such as 40,000 Americans each day contracting Coronavirus and 750-1,000 Americans dying from the virus every day. He argues that Trump saying “it is what it is” in regard to such numbers in the past supports the idea that the President has no plan. He asserts that Trump was not thorough enough in investigating the severity of the virus in China, and prides the Chinese government on how well they had handled it.

Notes from the Open Discussion: Trump points to Biden’s handling of the Swine Flu, and Biden refutes this point by saying that the death toll is incomparable and there was no economic recession. Biden highlights Trump’s claim that the virus would be gone by Easter, and how incredibly wrong this claim turned out to be. Trump states the country is ready to get back on its feet now that knowledge of the virus and its effects have been made public.

Two Minute “Uninterrupted” Question: The Economy is recovering faster than what was initially anticipated at the peak of COVID-19, and the recession has not been as severe as projected. What should the American public make of this?

Trump: 10.4 million people have been put back into the workforce after reopening businesses, and shutting it down again, like Biden has suggested, would ruin such progress. Democrats who want to keep the economy shut until-post election do not have the best interests of the American public at heart.

Biden: Millionaires and billionaires have been successful, whereas those in working class cities are suffering. Frontline workers have lost jobs fighting to help those desperately in need. He references the fact that Trump is on pace to be the first president to leave office with less jobs than he inherited.

Notes from the Open Discussion: Moderator Chris Wallace asks Trump how much he really paid in Federal Income Tax in 2017-2018, Trump says millions of dollars, and notes that he will provide evidence to this claim. Biden replies that Wall Street firms have estimated a trillion dollars in economic growth from his new plan, which includes heavy taxes.

Two Minute “Uninterrupted” Question: Why should each candidate be trusted to uphold racial equality in America?

Trump: He argues that Biden has referred to African Americans as “super-predators”, and that Biden portrays himself as a leader for racial equality, when in fact he does not support it as much as the public thinks he does. Trump was asked if he would be willing to condemn white supremacist groups, to which he answered “yes”, then never officially did.

Biden: He believes racial equality had never been fully achieved, but that it has also never been abandoned like Trump has done. He references the peaceful protest on the White House in response to George Floyd’s death and how Trump ordered the military to use tear gas to clear protestors for Trump’s photo opportunity.

Notes from the Open Discussion: Biden suggests a systemic injustice exists in the United States. He says that most police officers are just and good, but few “bad apples” must be held accountable. He argues that most officers would also revolt at the treatment of  George Floyd and Breonna Taylor. Trump mentions that the ending of racial sensitivity training stemmed from his view that it portrayed the country in solely a bad light, and that the training itself was racist. Trump believes that racial division is a party issue. Biden does not believe in defunding the police, but rather “reimagining” the police force through building closer-knit communities and getting officer’s involved with psychological experts. Biden suggests that riots and violent protests only help Trump’s cause, so in a way he supports them.

Two Minute “Uninterrupted” Question: Why should voters elect you based on your records as opposed to your opponent?

Trump: States that “There has never been an administration as successful” as his. He faithfully filled over three hundred openings for judges, including three U.S. Supreme Court justices. Trump says that he has done more in his first four years as President than Biden has “in forty years” as a government official.

Biden: Says that America has become weaker, sicker, poorer, and more divided under Trump. He argues that Trump caused a recession after Obama and Biden left him a “booming” economy. He points out that only billionaires have gotten richer and more prosperous under Trump. Biden claims the social fabric of the nation is ripped apart.

Notes from the Open Discussion: Wallace raises the question of climate change. Trump says he is handling it “phenomenally” and he plans to restore the nation to clear water and air. Wallace asks Biden about fossil fuel and emission statistics and Biden pledges to convert American society to a renewable-only energy nation. Trump argues the expenses would be catastrophic. Biden says that millions of green jobs would be created in the process. Biden vows to rejoin the Paris Accord if he were to be elected.

Two Minute “Uninterrupted” Question: How confident can the American people be in the integrity and fairness of the election? How can they know the man in office is truly the winner?

Trump: He suspects that the election will have fraud from the left, yet believes that he will prevail due to approval ratings. Trump states that mail in ballots are a fraud and can be easily tampered with. Wallace poses the question as to what Trump will do about mail in ballots that have already been sent in. Trump says there is not much that can be done, but he is worried about ballots with his name on them being found in the trash.

Biden: He says that Trump is scared of what the true voting totals will say about him. Biden urges people to be in person to vote and to vote early if possible. The outcome of the election will be the sum of the votes and nothing more, and he does not believe that tampering will influence the election.

Notes from the Open Discussion: Wallace asks the candidates if they urge their supporters to stay calm as they wait for the final vote count, and whether or not the candidates vow to wait to declare themselves a winner until it is made official. Biden answers “yes”, arguing that there is no other choice given that so many ballots are not even allowed to be opened until the day of the election. Trump says that as long as the election is fair, then he agrees and is “all for it”. However, he states that he will not stand for “thousands of ballots” being manipulated.