How “Let CO Play” Brought Football Back to Fall

Parents and athletes protested CHSAA's decision to keep football in the Spring. Now, the football team will play its first game Oct. 8. 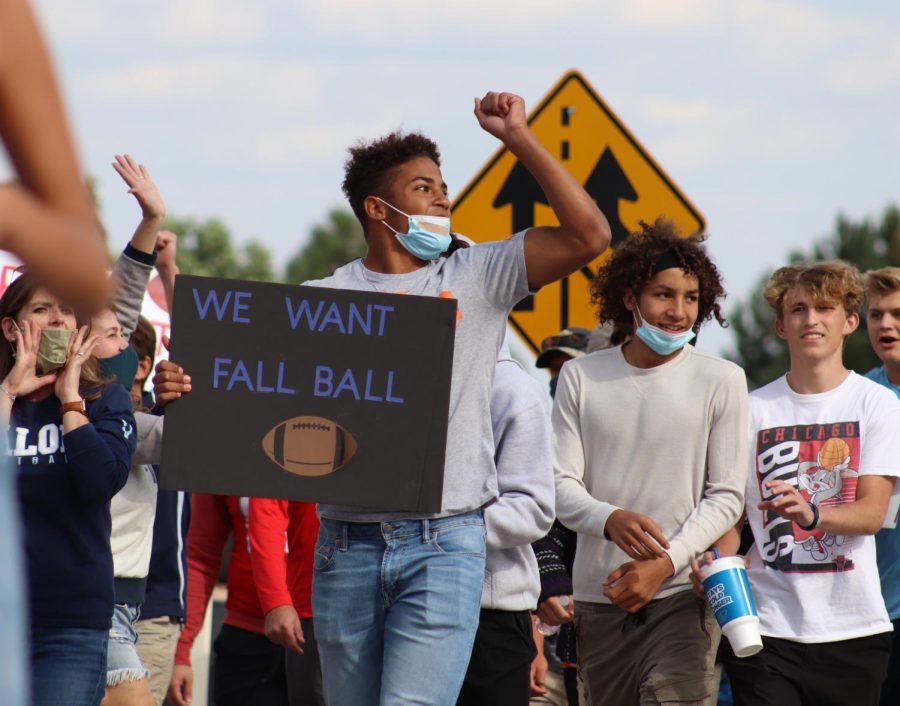 Jordan Norwood '23 and a group of Valor students cheers at the intersection of University and Colorado, to protest CHSAA’s decision to keep football in the spring of 2021 Sept. 11. Let CO Play organized three protests throughout the state. All starting at 3:30, the protests occurred in Highlands Ranch, Colorado Springs and Delta.

by Kira Zizzo and Amanda Brauchler

“Let us play! Let us play! Let us play!” The chants of protestors mingle with the sounds of passing cars and honking at the intersection of University and Colorado as students and parents protest CHSAA’s decision to delay football to spring of 2021. In response to CHSAA’s interference with the football season, Vann Schield ‘21’s father, Trent Schield, started a petition to “Let CO Play” and organized one of three protests Sept. 11.

The campaign advocates for Colorado student-athletes to have the opportunity to engage in sports safely this fall. Through the Let Colorado Play campaign, students and parents took their disagreement to the streets with peaceful protests in Highlands Ranch, Colorado Springs, and Delta. The Let Colorado Play campaign also utilized online platforms to amplify their voices, with a petition that has over 15,000 signatures and a website that highlights individual student-athlete stories about how a spring season affects them.

The Let Colorado Play campaign revolves around remedying the detrimental impact that the lack of sports have on student athletes. Trent Schield started this campaign to due to the foundational importance of football to his son, Vann Schield ‘21. He felt inclined to exercise his First Amendment rights in an effort to reverse CHSAA’s decision to delay the football season, striving to elude negative impact of CHSAA’s choice on his son. Trent Schield was concerned that Vann would be at a disadvantage for his future, lacking the chance to impress college coaches.

“Vann’s worked since he was six years old, just to see this die-down and the potential of not being able to play his senior year gets to be rough. It’s huge…The only way they’re making change is by doing what we’re doing and getting a leader like Polis, like we need him to be, to step up and tell CHSAA that we need to play,” Trent Schield said.

For many student athletes, the importance of fall sports exceeds the playing field and has served as a means of unity and belonging.

“It’s our family. We’re all a brotherhood. When we can’t play together, it’s saddening, it’s breaking up the family,” Sam Anderson ‘21 said.

Anderson also began playing football at the age of six and since then, it’s been a substantial portion of his life.

“They go out there, practices, the summer, working hard, to get to this point your senior year. He’s finally a senior, this is his time, and now he doesn’t have the opportunity to go out there and do it,” Lynn Anderson, his mom, said.

The football team will face Columbine Oct. 8 in their first game of the season at Echo Park at 6 p.m. Only seniors are allowed to attend the Varsity football game, all crowd-goers must have a ticket purchased through the front office.