A new approach to the new year: Setting a New Year’s theme

New Year's resolutions aren't for everyone. They can be hard to make and even harder to stick to. Have you ever considered setting a New Year's theme? 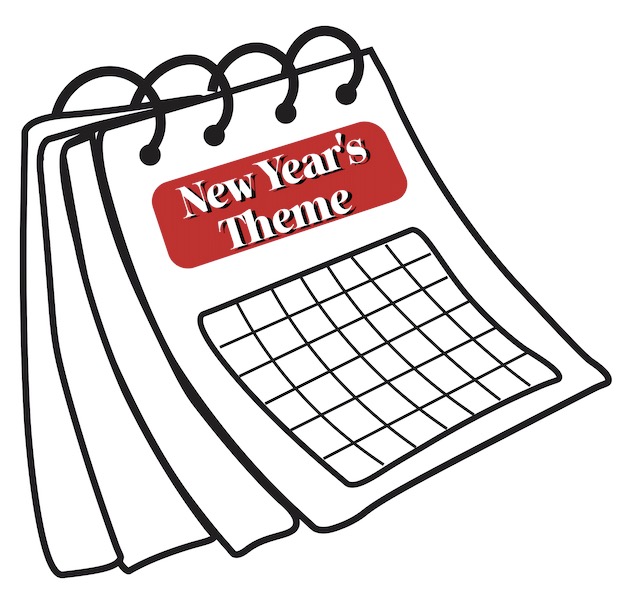 I had just finished telling a friend about a January calendar I made. I drew a grid on a piece of paper and filled the boxes in with the dates of January 2021 (and of course made it colorful). On the back, I had written goals for January.

He asked me if they were New Year’s resolutions, but they were really just meant for the month of January. I was planning on setting new, little goals each month and creating a calendar to go with them.

We got into a conversation about New Year’s resolutions and about how he thought they were pointless. He shared with me a video by YouTuber CGP Grey about New Year’s themes. I had to watch it a couple times to fully understand it, but I think there is a lot of logic to setting a yearly theme.

The overarching theme, and unintentionally so, of my January calendar was mental health. All of the goals I had set for January somehow pertained to working toward becoming a mentally healthier individual. The New Year’s theme works the same way– you set manageable goals under a specific theme to keep you on track with them throughout the year.

When you come up with huge, life-altering ways to “better yourself” and don’t think about what it will specifically look like for the next 365 days, it can be a little overwhelming. Picking a theme gets you out of what Grey calls the “Resolution Rodeo”.

This, he says, is the phenomena we go through when setting a New Year’s resolution, failing to achieve it, setting the same resolution (or one of a similar nature) the next year, failing to achieve it again, and continuing this process; it is like someone who keeps getting bucked off a bull and hopping right back on to the same one, expecting different results.

To create a New Year’s theme, Grey suggests calling the new year the “Year of (blank)”, and filling in that blank with a broad enough theme so that you have room to adapt and be flexible with yourself throughout the year. In my opinion, the theme should also be narrow enough to where the goals you set can still be logically categorized under a single theme.

The beauty of having a broad theme is that, as Grey says, “the theme can change because so can you”. Rather than having a maybe rather scattered list of things your day-to-day life may not currently entail, having a theme and thinking about things you can do within that theme could make working toward a New Year’s goal a little more manageable.

Grey provides ideas for New Year’s themes in his video and further discusses how to work with the idea of setting a “theme” and make it doable. Picking a theme for the year means that you make progress in a certain area rather than trying to form new daily habits.

According to an article from Psychology Today, we form habits through a “habit loop”, which describes the signal to which we are trained to respond, how we respond to it, and the “reward” we receive afterward. Forming habits can be difficult because our brains have to be trained to respond to a signal or stimulus the same way every time. This can take some time and arguably discourage those trying to stick to New Year’s resolutions.

All of this considered, I highly recommend checking out CGP Grey’s video on choosing a New Year’s theme. I think the idea of a New Year’s theme well captures what it means to try to make some sort of personal progress in the new year.

New Year’s theme doesn’t sound like your thing? Stay tuned for a future article covering how to stick to a New Year’s resolution.

Best of luck to anyone determined to stick to a New Year’s resolution of any form– you’ve got this!