Wrestling: Back in Action After Quarantine

One week after being released from their team-quarantine, the wrestling team faced Rangeview High School. 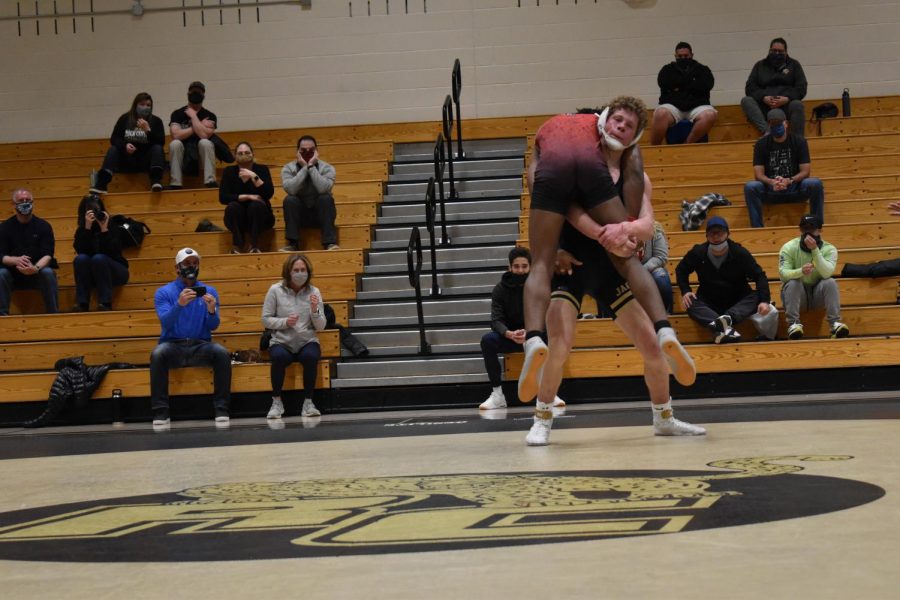 Jack Cuthbert ‘22 lifts his opponent during his match Feb. 20. Cuthbert lifted his opponent several times before losing his match. "It’s tough coming back from two weeks of quarantine but you just got to give it all you got,“ Cuthbert said.

Two boys tested positive and sent the whole team into a stay-at-home-quarantine. The team had to do their best to limit their possible exposure to the Coronavirus. That included either staying home on their cohort days or being extra careful in public areas. The quarantine also meant that they could not participate in after-school practices or wrestle in meets.

“Hearing that the Battle of the Ranch ha[d] been moved up a few days was angering, especially knowing that we could have made the original day it was planned for,” Ryan Gerlitz ’22 said. “It’s something we all trained hard for and is one of the biggest events of our season, so not having it is disappointing.”

The varsity matches of the dual meet were tied by the end of the night 33-33. After much discussion with the announcers and coaches, they decided that the team with the most falls would win, and Rangeview High School won 3-2.

The team took a moment to honor their teammates for Senior Night Feb. 20, recognizing Jack Basche, Travis Glenn, William Kochevar, and their parents for their hard work and dedication to the wrestling program.

The boys still have more upcoming meets Thursdays and Saturdays. Check out their schedule here.