Striking Back at COVID: How the Baseball Team is Adapting

Take a deeper look into how the baseball team is both upping their game, and implementing changes within their teams in response to the pandemic 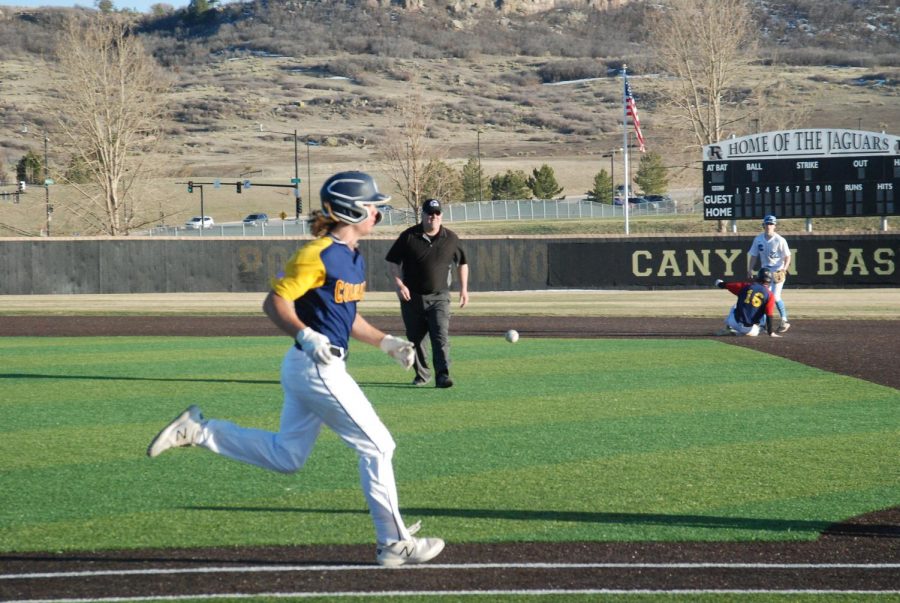 Brady Campbell '24 runs to first base as Carter Spielmann '22 slides to second base at Varsity home game April 2. The opposing team hustled to get the ball but Campbell and Spielmann beat them to the bases.

“Whoever wants to know the heart and mind of America had better learn baseball,” said Jaques Barzun, a French-American historian with a passion for baseball. The same can be said for the high school: if one wants to understand the Jaguars, one must understand the sports teams who strive to overcome countless obstacles in order to continue to play their sport.

While some athletes may play for one season and only train for the remaining weeks, the school’s baseball program lets no time get away from them. The 2020-2021 official, CHSAA (Colorado High School Activities Association) regulated high school baseball season is set for April 26 through June 5, with District Playoffs June 12 and State Playoffs June 18-26. Official spring season tryouts will start April 26 and teams will be chosen April 28. Teams are expected to play 18 games instead of the usual 23. All dates remain subject to change.

However, baseball chose to not limit themselves to one season a school year, and instead started off the 2020-2021 school year with a summer season that went through July, and participated in a winter workout program from January 9 to February 27 using the school’s weight room and Marucci Clubhouse in Castle Rock.

While waiting for the official start date, they are currently running their spring training season registered as club teams instead of school teams. The spring training season includes practices, games, local tournaments, and more, all before the CHSAA-regulated season. It offers a chance for all the players to continue to improve their skills.

“Everything’s competitive here. We’re all about being the best, pushing our best, pushing our players, so of course, I’ll be aiming for varsity just like every kid here. Our whole team is built off leadership, teamwork, and pretty much working as hard as we can,” infielder Landon Hofmeister ‘23 said. “I play first and third, and I catch and pitch. I love it, it’s my escape and something I’m truly passionate about, I’ve loved it ever since I first started playing. We’ve started to get back into the groove, started trying to hit and do everything we can, but you gotta work on your own if you want to be the best.”
Building A Legacy
When the teams are not together, they are still working towards an upgraded baseball future. The official Rock Canyon baseball “Legacy Project” is a project run by the coaches to improve the baseball facility. Players and parents alike help fundraise through activities like selling Rockies tickets, running casino nights and parent outings, and collecting direct donations.

In 2020, five major goals were accomplished: the previous dirt and live grass of the infield were replaced with new turf, the dugout was expanded, batting cages, plyo walls, and a bullpen were added to the left field, and the player/coach clubhouse was improved, with lockers and a meeting area.

“The new infield is the best playing surface I’ve ever played on, it’s fantastic!” Coach Jack Burk said. “It’s special turf that plays like dirt and grass, so it’s not like a normal astroturf. It’s been really cool to see the changes and I know we’ve got some more planned that I’m really excited for. Hopefully, we’ll be renovating the batting cages, hitting area, getting some more along the left-field for like workouts and stuff, maybe getting some stuff for the students in the outfield behind the fence… I’m really excited to see what we can do,” Burk said.

As the weather improves, it is likely the refurbishments will pick up speed.

“When it stops snowing, I feel that a lot of players, including myself, will be motivated to use the new features outside of scheduled practices. The longer off-season allowed me to improve further, for me it consisted of a heavy training program in the gym alongside fundamental practices whenever the weather was nice. The Legacy program Dyer rolled out has created a great facility,” catcher Dexter Wenger ‘22 added.

In the upcoming year, the team hopes to add a 10,000 square foot Indoor Training Facility near the home dugout, and permanent stadium bleachers to replace the current temporary stands.
Playing Through COVID-19
“Because of COVID, we’ve had to have smaller groups for everything we do, and definitely are trying to take as many precautions as we can, with temperature checking and COVID tracing as best we can,” Coach Burk said. “We’ve been very safe and fortunate that we’ve been able to do what we have and we’ve been able to make the most of it. We’re fortunate to have the support of the school and the parents that we do, and the coaching staff to make this all possible.”

All players and coaches are required to wear masks while indoors, although they have more freedom while practicing outside, especially due to the naturally spaced-out positions of baseball. Because the spring training season teams have clearance to play as club teams instead of as school teams, the baseball program sticks to the current Colorado health and sports guidelines. The Colorado Department of Public Health & Environment stated in February that “the Executive Order does not state that you must wear a mask outdoors unless you are waiting on public or non-personal transportation. However, it is strongly recommended to wear a mask whenever you cannot keep a safe distance (at least 6 feet) from other people.” In spite of safety protocols followed, multiple RCHS baseball team members, including Head Coach Allan Dyer, have already been quarantined due to testing positive for COVID-19.

“We had an outbreak back in early February where we got shut down for two weeks. We were lifting and somebody was exposed in the weight room, some of our kids got COVID, and nobody could do anything for two weeks. I myself got COVID back in January, I think maybe our players got it and somebody passed it to me. Even with masks and everything, our guys still got it. We try to tell guys to stay away if they don’t feel well, we have a lot of antiseptics we keep around the field, we try the best we can,” Dyer said. “Thankfully, almost everybody’s healthy now. We have the biggest spring turnout of any school in the entire state, even just our buy-in from our players is one of the top in the state, if not the top. We have some very good older leadership, and our freshman and sophomore classes especially are really good this year even despite their recent quarantines.”