How Skateboarding Culture Has Influenced You, RCHS, and the World 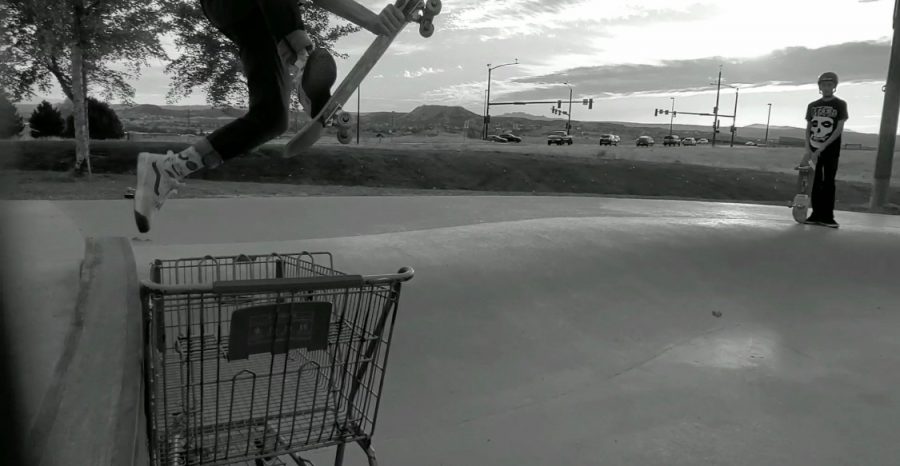 Kayden Ozdemir '24 jumps over a shopping cart at a local skate park. "I skate just for fun but my favorite trick to do is probably the varial kickflip," Ozdemir said.

How can something go from being a banned, trashy hobby to a global phenomenon overtaking kids and adults alike? How is it possible for a sport to move from illegal to Olympic, and influence even the smallest little blips on the map, such as Rock Canyon High School? Take a look at the history of skateboarding and its culture.

Skateboarding faced numerous ups and downs as it evolved, starting off as “sidewalk surfing;” barefoot surfers using wheels under wooden planks in Southern California in the 1950s. It gained popularity throughout the ‘60s until many people spoke up against it, feeling it was a dangerous community disruption.

In 1972, safer wheels were developed, and the first skateparks were inaugurated after years of skaters using drained pools and random streets, and so it made a comeback until the 1990s, when it was banned in many public and private spaces.

Skaters frequently faced rude stereotypes and were often viewed as criminals, dropouts, or druggies who damaged communities and caused trouble. Over time, the prejudices have swung back and forth, with skateboarding even being tested as a potential form of urban transportation for the US military.

At the moment, these judgments have somewhat lessened as skateboarding and its culture have begun to regain popularity, especially amongst teens. Presently, there are an estimated 85 million skateboarders worldwide, a majority of which are under 18.

“One reason for the sport’s popularity is the simple anatomy of skateboarding. All you really need is yourself and a skateboard. Technically, you don’t even need shoes – though you should wear those for safety. The skateboard itself is fairly low cost, especially if you don’t need a top-of-the-line board. Plus, anyone can try skateboarding. It doesn’t matter if you are overweight or thin, short or tall, young or old – there’s a board and a style that will work for you,” Steve Cave, skateboarding teacher and author, said in his article “Why Is Skateboarding So Popular?” on Liveabout.com.

With the surging popularity of skateboarding, increasing benefits have also been seen. Skateboarding is a cheap, environmentally friendly mode of transportation that can help reduce traffic congestion and encourages people to get outside and be active. Some people have actually turned skateboarding into a career, such as the famous skateboarder and entrepreneur Tony Hawk. The sport has even been officially added to the upcoming Summer Olympics in Tokyo.

“My dad taught me how to skate at a very young age, and I’ve been into it ever since. I skate anywhere I can, mainly parking garages,” Kayden Ozdemir ‘24 said. “I feel like it’ll be fun to include the sport. There’s already professional skateboarding, but bringing it into the Olympics introduces new factors.”

“I think it’s super cool that skateboarding’s going to be in the Summer Olympics now,” Sam Record ‘23 said. “I think in the past, skateboarding has been regarded as something homeless or shady people do, and so now I think it’s getting more attention and people are more approving.”

Not only is the activity spreading, but the culture that accompanies it is growing as well.

“I think skating has influenced my fashion style a lot. I think the ‘90s and early 2000s are definitely coming back, even for people who don’t skate, things like baggy jeans and flannel shirts and rings and stuff,” Record said. “But I also think a lot of people view it as more of an aesthetic, which a lot of us actual skaters don’t always agree with because to us, it’s a lot more than that.”

Even current slang has picked up skate speak. The use of words like “steeze,” “stoked,” and “gnarly” all began to steadily increase in the late 1900s, around the same time skating grew in popularity. “Sketchy” and “rad” use peaked in the 1980s and dipped in the 2000s, but are on an impressive rise yet again. This shows that many of these slang words that have supposedly diffused from skaters often follow the popularity trends of skateboarding itself.

“There are sayings like ‘that was bolts,’ which essentially means the trick was good because you landed on your bolts. In addition, words like ‘steeze’ and others are examples of skate culture playing into everyday words I use,” Ozdemir said. “Skate culture hasn’t affected me personally with my clothing style or my music taste though. If anything, surfing has had the biggest impact on those things for me.”

“Overall, it’s pretty fun. I honestly don’t really have goals for skating. I just think it’s fun to do because no one really tells you what to do. You can just do whatever you want when you want to, which is exactly why I like it,” Record said.