Here's how Varsity baseball got to play like the pros. 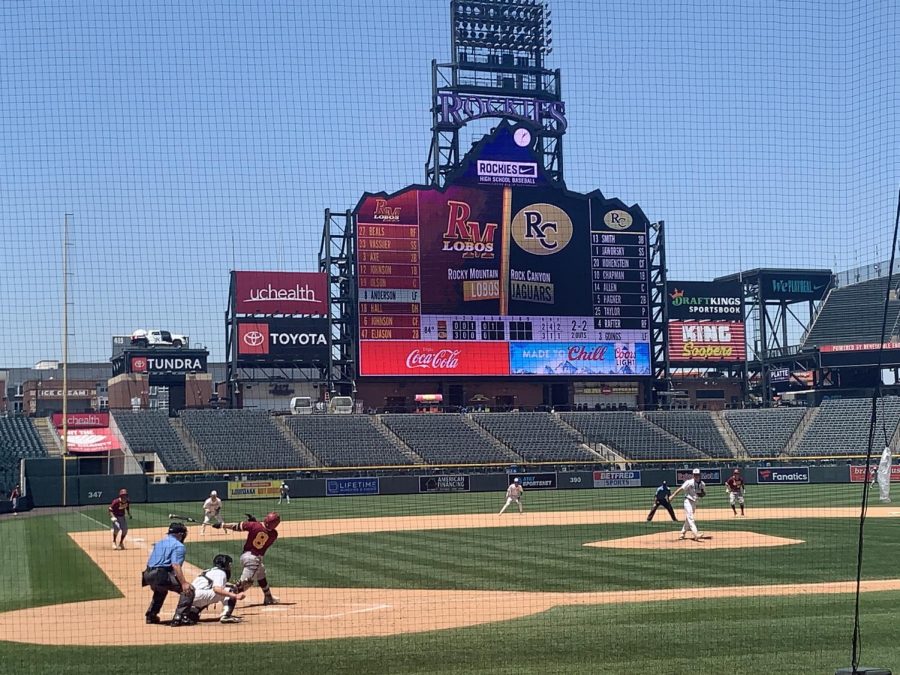 Catcher Dexter Wenger '22 crouches as the Varsity team reacts to a hit from the RMHS Lobos at Coors Field June 8. In the 5th inning, the game neared a tie and the tensions were heightened. "I have played for nine years and plan to continue playing until I’m told to stop," Wenger said. "As a catcher, being able to command the game is thrilling."

With bluebird skies and soaring temperatures nearing 100 ℉, the morning of June 8 was a once-in-a-lifetime experience for the Rock Canyon Varsity Baseball team. This year, the team had been selected as one of the honorary Colorado high schools to play a game on Coors Field.

“The experience at Coors Field was amazing. It was really cool to play on the field I always grew up watching, and play where the pros have played,” 2nd and 3rd baseman Eric Hagner ‘23 said. “I’ll never forget it.”

The boys played about a two-hour game against the Lobos of Rocky Mountain High School and lost 8-3. Family, friends, and fans alike received free admission to front row seats, and many younger baseball players from RCHS came to support the team as well.

Players had the opportunity to explore the stands, dugout, and field to a further extent.

“From the field to the stadium, playing at Coors Field was overall just a great experience,” shortstop Chase Jaworsky ‘23 said. “I’ve been playing baseball for 11 years and I want to play as long as I can.”