You Can Run, But You Can’t Stay Dry

A look inside the new game that has taken Rock Canyon Seniors by storm. 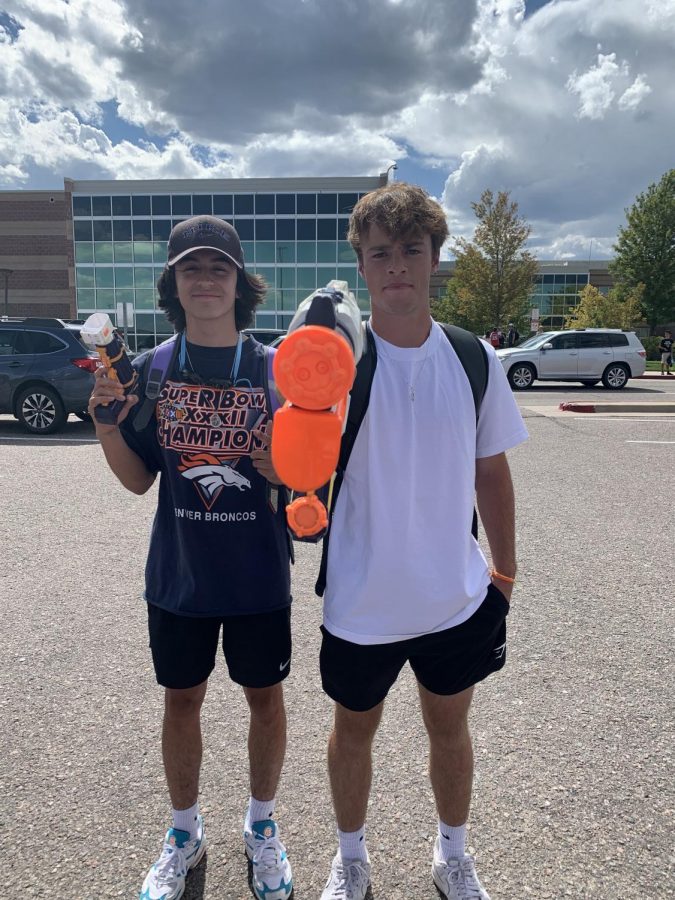 I get out of my car on a brisk Monday morning at Rock Canyon High School. Except this isn’t a normal Monday. Senior Assassin has begun. I step onto the pebbles and rocks we call our parking lot. Then I hear a sound from behind me. BANG. I feel something hit my head. I’ve been shot. One minute into the game, first blood, I have been assassinated.

Senior Assassin is an advanced game of tag that has taken the nation by storm. Seniors all over the country are taking part in this phenomenon.

Rock Canyon seniors have started to participate in the game.

There are two organized games that seniors have been playing.

The first game’s so-called “captain” is Gracie Gunther ‘22. She organized 48 of her friends to participate in senior assassin.

“I got the idea from seniors last year who had a game of their own. Julia Drobish ‘21 passed it down to me to organize for the seniors,” Gunther said, “My favorite moment so far was when I handed out the invitations and everyone got really excited. It really brought everyone together.”

Their game has been a success so far as assassinations are happening almost daily and the game is moving smoothly.

“My favorite moment so far was when someone snuck into their target’s house late at night and shot him while he was laying in bed,” Grace Vaughan ‘22 said.

The second game is led by Tiffany Lahey ‘22 and has over 100 participants.

“I generated an all inclusive model for the Senior Assassin game so anybody could play. I went and created an Instagram page for participants and it blew up. We gained over 100 players,” Tiffany Lahey ‘22 said, “I am so proud and excited with how the game has played out.”

After the implementation of no-safe Thursday’s, which means you can not wear protection from getting shot, the assassination count has increased drastically.

Two of the most accomplished assassins right now are Carter Pollock ‘22 and Kyle Mackzum ‘22, each on their third target.

“I plan to play it pretty safe but also be aggressive so the game moves on quickly, but I try to get my target at unpredictable times,” Mackzum ‘22 said.

“Each target is different, so there isn’t a singular plan, but going forward, I am going to take advantage of no-goggles Thursday,” Pollock said.

Some participants haven’t had the same success as others.

Caden Tisdale ‘22 was one of the first kills of the games after he was caught in the parking lot without his goggles.

“I should’ve held on to my goggles and paid more attention,” Tisdale ‘22 said, “My favorite moment so far though has been the hunt for people and the bonds my friends and I have made.”

Even if you were first blood or still fighting in the game to this day, everyone finds their place in Senior Assassin. It is a fun game that everyone can enjoy and a tradition that will hopefully continue through the years.