Alivia Eikenberg '25 is the only freshman on the girls varsity volleyball team. Take a look at this freshman's perspective as she takes on being the youngest player the team. 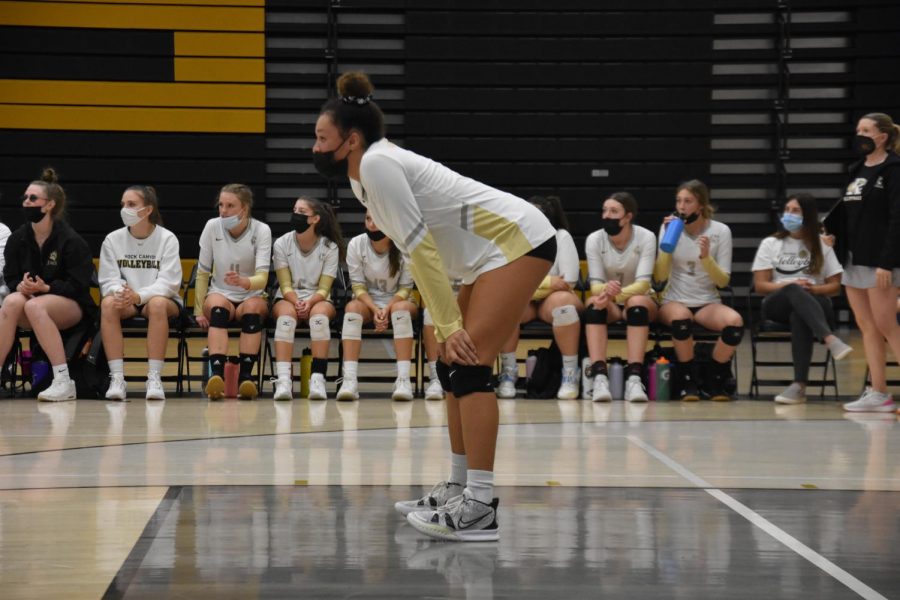 Alivia Eikenberg '25 prepares to play the next point on Sept. 8 at the game against Arapahoe Highschool. Eikenberg prepared to pass the serve receive ball while she played back row.

by Kendall Foxworth and Lola Boushelle

The Canyon Crazies are crammed into the bleachers, shouting as loudly as a student section can to support their home team and intimidate the competition. Suddenly, the gym falls silent as Alivia Eikenberg ‘25 approaches towards the ball and jumps double her height into the air. The next sound is the volleyball crashing on the other team’s side. As Eikenberg pulls off the kill, the crowd erupts in excitement. Eikenberg took the spot as the only freshman player on the varsity team this school year. Not only did Eikenberg beat out many older athletes but she plays one of the most popular positions, an outside hitter. This makes her odds even slimmer.

“I was super excited when I found out I made varsity and my brother was happy for me because he made varsity as a freshman so it runs in the family,” Eikenberg said.

There are multiple factors to making the volleyball team. The volleyball season starts at the first open gym in May, followed by conditioning, weight lifting, and scrimmages. Open gyms give the players the opportunity to meet the coaches and scope out the competition. Regardless of the time and effort the athletes put into open gyms and conditioning, it does not guarantee them a spot on the team.

“We did weight lifting almost everyday in the summer and it was fun. I got to meet new people and reconnect with old friends. Open gyms were one to two times a week when the gym was not flooded,” Eikenberg  said.

According to her coaches and teammates, Eikenberg has multiple qualities of being a good teammate.

“Alivia is a humble player and a great teammate. She gets excited for the overall team’s successes rather than her own,” Coach Nylund said. “She is an all around great player and is on the court for all our games.  She excels both defensively and offensively.”

Over the season, athletes have time to bond with one another and she has made friendships that go beyond the court.

According to an Instagram poll of 128 students, 20% of students thought three or more freshmen made the varsity volleyball team. In reality, only one freshman athlete was able to make the team and play with students many years older than them. Eikenberg will spend four years on varsity allowing her to have more time on the team than any other volleyball player in her grade.

Come support girls volleyball to watch Alivia and her team compete. Games are normally away, as the Rock Canyon gym is under construction.