Here's a look into the reconstruction of the main gym. 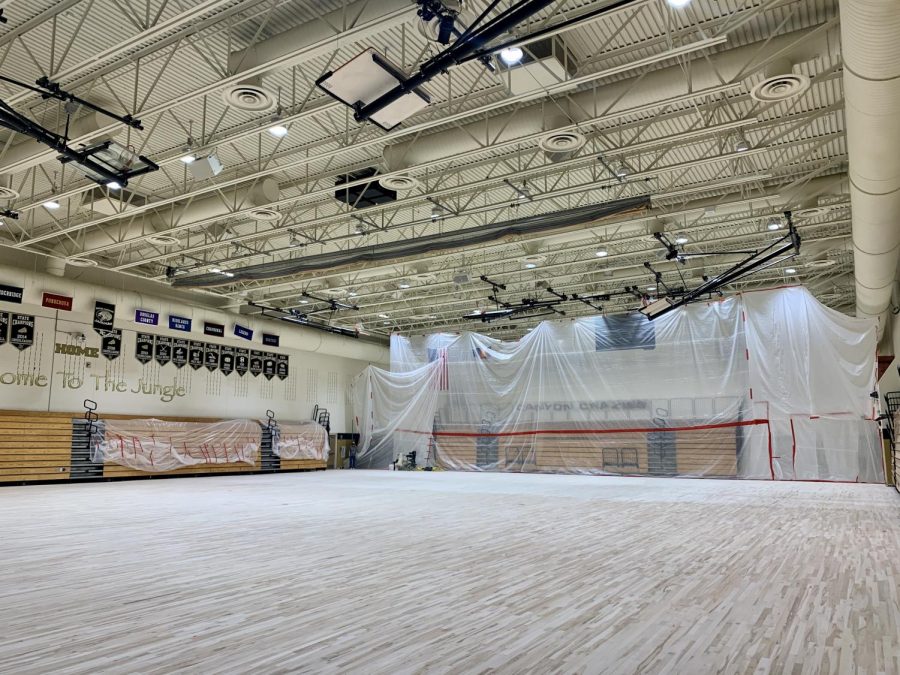 The main gym remains roped off from the public as final touches are finished Sept. 23. After being impacted by weather over the 2021 summer break, months of work have been put into restoring it. "It's affected quite a bit here, but we're looking forward to getting it back," Athletics Director Thomas Brieske said.

The entire main gym, still roped off and shut down, has been worked on all summer and fall. The harsh reality of unexpected flood damage has caused many people and events to have to adapt.

“This summer they were redoing the school’s roof, so when they tore everything off, obviously they took off all the protection. There’s layers of lashing and pebbles and gravel and all that stuff that was all removed so that they could make repairs. Unfortunately, during that time, there was a storm that came through, dumped a lot of water through there, and wasn’t detected for a day or so, which caused the gym floor to start warping,” Athletics Director Thomas Brieske said. “Once we found that out, we had to dry all the boards out and dry the concrete out underneath, which took probably a week or two of the fans constantly blowing air. When they assessed the damage, there was enough that they had to remove about half of the gym floor.”

New boards have been reinstalled on the damaged half of the floor, and the entire gym floor has been re-sanded and stained, so that it will all appear to be the same. The school administration hopes that once the floor is sealed, finished, and painted, all will be as close to back to normal as possible.

“It’s not only an inconvenience not being able to have any assemblies, but also homecoming was not on site, it had to be off site. PE classes are having to be outside all day, which is especially rough on the teachers because they’re not used to being outside in the sun all day,” Vice Principal Gregg Sheehan said. “That was, I believe, about $145,000 worth of damage that insurance and the roofing company are figuring out, but we won’t have a gym until at least October 1.”

Rock Canyon’s fall indoor sports have especially been impacted. While groups like wrestling, cheerleading, and poms can use areas of the school like the wrestling room, commons, or even hallways, off-season sports that typically train in the gym, and in-season sports that require the gym, such as volleyball, have had to adapt.

“We weren’t able to finish the summer with some camps we had set up, and then a lot of our offseason sports, like boys basketball, girls basketball, and volleyball, all have preseason stuff going through there, and they weren’t able to do a lot of that in there. For our volleyball team, we had to move all of our home games that we were supposed to have to the opposing school’s gyms, so we’re on the road a lot this year,” Brieske said.

The Varsity and JV Volleyball teams travel to the 303 Volleyball Academy, in Englewood, every day after school in order to hold practices. Freshmen and sophomores are using the school’s auxiliary gym to train despite the fact that it cannot be used for games. Although volleyball has games scheduled throughout October, all matches will remain at other schools even after the gym is finished.

“Having our gym shut down for the whole season has been really tough on our team. Home games are always super fun and full of energy, and especially since we weren’t able to have a student section last year, it was supposed to be a really big year for us!” Varsity volleyball player Addie Waller ‘24 said. “It’s just not the same without the same energy supporting our team. Not only will we not have that, but our special nights, like Parent Night, Senior Night, and Dig Pink Night won’t be the same either.”

Until construction is completed, events such as dances, assemblies, and more will be held in other locations on campus or even at outside venues. More information can be found on the student council Instagram account, at @rcstuco.