As autumn passes by, here are some novels that you can enjoy. 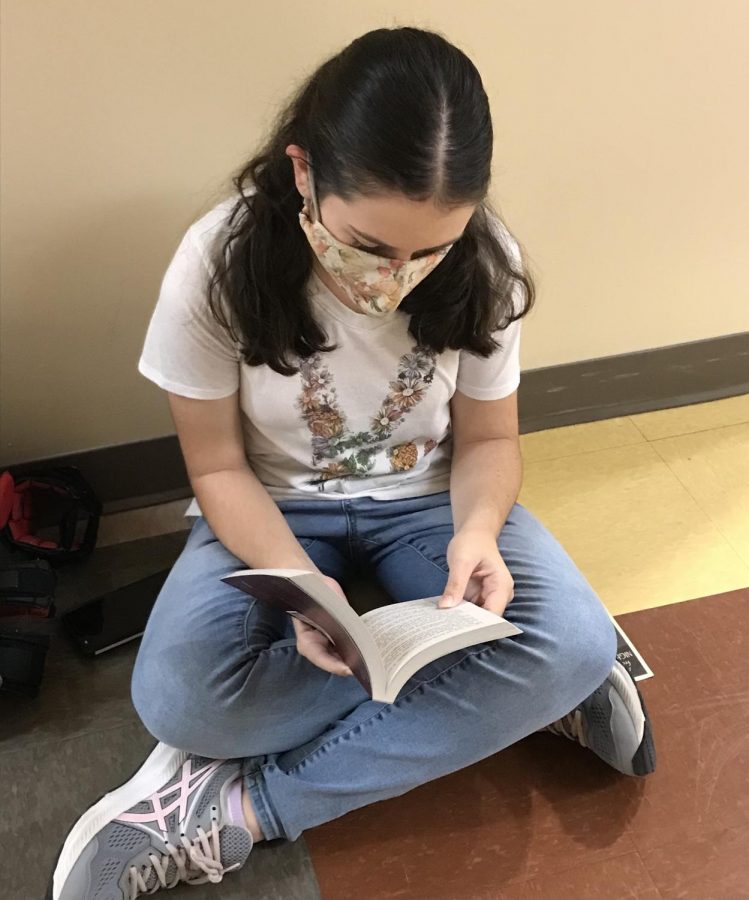 Sophia Miller '25 reads Percy Jackson and the Olympians before school on Oct. 7.

Imagine flipping through the pages of a book, magazine, or comic book. The soft pages brush against your fingers. The faint smell of printed ink fills your lungs. You hear the soft whisper of pages turning. Here is a guide from fellow students on what to read this fall.

Wonder is a realistic fiction story about a ten year old boy with a facial anomaly. He is bullied and seen as different from the other kids, and the story reflects issues in society, according to a book review on The Guardian.

“It’s a good story and it gives the perspective of someone who isn’t seen as ‘normal’,” Colette said.

The City of Ember is a sci-fi book about a city that was built underground in order to ensure the survival of the human species, according to Goodreads.

“It keeps me reading. I generally don’t read books, but I was surprised that I finished it in three days,” Alkappan said.

The Selection by Kiera Cast – Recommended by Hansika Lakireddy ‘25

“For thirty-five girls, the Selection is the chance of a lifetime. The opportunity to escape the life laid out for them since birth. To be swept up in a world of glittering gowns and priceless jewels,” according to Goodreads.

The Selection is a fictional romance mixed with insights into the life of royalty.

“It is a different world and it’s not just a typical royalty book and it showcases the hardships of royalty as well as the glamour,” Lakkireddy said.

The Martian by Andy Weir – Recommended by Ryan Sprengel ‘23

“Six days ago, astronaut Mark Watney became one of the first people to walk on Mars. Now, he’s sure he’ll be the first person to die there,” according to Goodreads.

The Martian is a science fiction book about an astronaut’s sojourn on Mars.

“The Martian is a good book. It’s a fun read, there’s a lot of high stakes in that situation, it keeps you reading, and the characters are really interesting too,” Ryan Sprengel ‘23 said.

One Of Us Is Lying by Karen M. McManus – Recommended by Addyson Shuffield ‘24

One of Us Is Lying is a murder mystery about five students who get detention. When one does not make it out alive, the students turn against each other, knowing that one of the others committed the murder, according to Goodreads.

“I like it because it has a little suspense and it’s a fun story that makes you think,” Shuffield said.

“They are an unlikely pair: George is ‘small and quick and dark of face’; Lennie, a man of tremendous size, has the mind of a young child. Yet they have formed a “family,” clinging together in the face of loneliness and alienation,” according to the Tattered Cover website.

Of Mice and Men is a story about two friends who labor alongside each other.

“It was interesting how George kept up with Lenny for his entire life and it’s a good fiction book,” Buie said.

“What was once the western United States is now home to the Republic, a nation perpetually at war with its neighbors. Born into an elite family in one of the Republic’s wealthiest districts, fifteen-year-old June is a prodigy being groomed for success in the Republic’s highest military circles,” according to Goodreads.

Legend is a dystopian fiction that contemplates social issues.

“It is a cool dystopian world book and the issues it looks into [are interesting],” Kingman said.

“Harry Potter’s life is miserable. His parents are dead and he’s stuck with his heartless relatives, who force him to live in a tiny closet under the stairs. But his fortune changes when he receives a letter that tells him the truth about himself: he’s a wizard,” according to Goodreads.

Harry Potter and the Sorcerer’s Stone is the first of seven books in a fantasy series.

“It’s mysterious, has good foreshadowing elements, and it’s easy to get sucked in,” Gruszczynskn said.