His Vision for Valor

One student is taking a stand against Valor Christian High School’s treatment of LGBTQ+ staff and students. 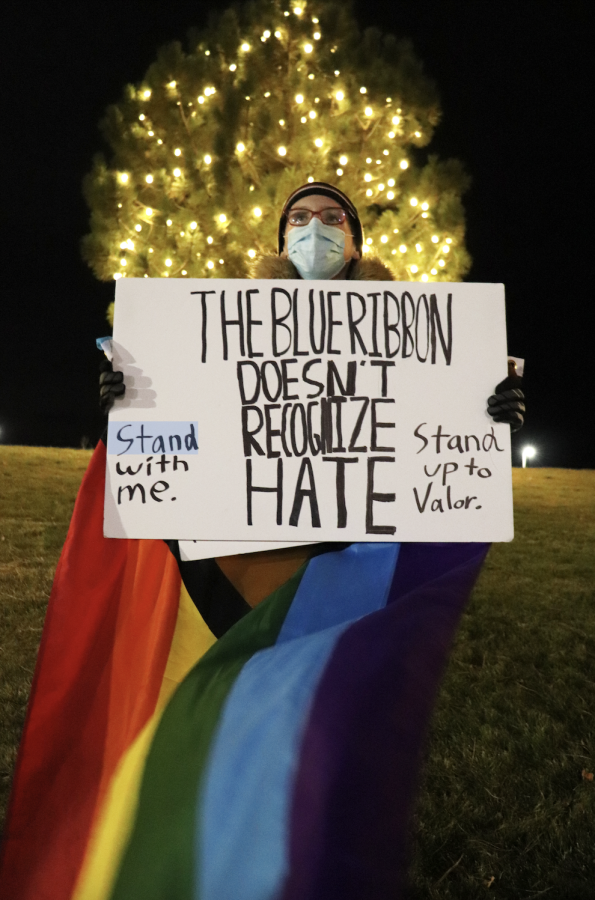 The thick, vibrant, garnet-tinged rims of Gavin Moody ‘22’s glasses envelop lenses, reflecting the transient glint of car headlights and fluctuating hues of traffic lights as he stands on the sidewalk across from Valor Christian High School (VCHS), protesting their treatment of LGBTQ+ staff members and students, particularly Inoke Tonga and Lauren Benner.

Following Tonga’s experience with VCHS, numerous students came forward along with Lauren Benner, a former women’s lacrosse coach at VCHS, who shared a similar story. She was also called to a meeting with school administrators, with the belief she would be receiving a raise. Instead, they asked her if she was dating a woman. School administrators subsequently told her that if she wanted to pursue a relationship with another woman, it wouldn’t align with VCHS’s culture statement, 9NEWS reported. Benner resigned from her position in 2020.

Moody found out about this controversial situation during a current events assignment as a part of Kate Herrin’s English class. This assignment instructed Moody to find a piece Colorado news, national news, and world news. He learned that VCHS was awarded the National Blue Ribbon by the United States Department of Education (USDE).

“The National Blue Ribbon Schools Program recognizes public and private elementary, middle, and high schools based on their overall academic excellence or their progress in closing achievement gaps among student subgroups,” the USDE website said.

Moody felt that VCHS was undeserving of this award due to the school’s treatment of the LGBTQ+ community.

“The federal United States government rewarded this school that fired two coaches for being gay and they received awards for it. That’s not right. I think that’s bullshit,” Moody said.

Every day after school, he stands on the sidewalk facing VCHS, holding a sign and protesting by himself against the forced resignation of two LGBTQ+ coaches and mistreatment of LGBTQ+ students.

“I stand across the street over  there because nobody else does,”  Moody said. “I’m bisexual. I see  people in my community, who I  love, being discriminated against  because of something that’s  completely arbitrary and out of  their control. I can do something  about it by standing there for 30 minutes.”

Moody’s moved his work  schedule so he can protest at the time that the VCHS school day ends, ensuring his message reaches a larger audience. He plans to protest year round, or until his goals for furthering support for the LGBTQ+ community are met.   “My end goal is  to be able to stand on the sidewalk surrounding Valor and get a bunch of  people holding hands,  literally locking the  school with love,” Moody said.

He is also fighting  for a safe space inside of VCHS for LGBTQ+ students. Moody is advocating  for the dismissal from employment of  the administrators at VCHS who forced Tonga and  Benner to resign. His final goal is that VCHS’s Blue Ribbon award  will be rescinded.

“We’re only here for so long,  might as well live how you want  and find ways to move forward. Progress is inevitable,” Moody said.

In his four months of individual protest, Moody’s  message for change has been met  with mixed public responses. He appreciates the power of simple positive gestures.

“There’s this one white truck  that comes around 3:30. Almost  every day I’ve been out here,  he honks at me and gives me a thumbs up. Those little things are really sweet,” Moody said.

However, positive public interactions have been limited for Moody as he faces backlash on a daily basis.

“The people of Valor told me I  was going to hell for holding up a sign,” Moody said.

“Since I come out here every day, I just hold up the sign, I have been flipped off every single day. I’ve been told to go home and that nobody cares. I’ve had entire cars flip me off and received a lot of frowns.”

Moody views these negative actions in a humorous light, finding irony in this situation.

In comparison with VCHS, Moody finds Rock Canyon High School (RCHS) to be more respectful and inclusive toward LGBTQ+ students and staff.

“Our school treats [LGBTQ+ students] better than Valor does, they’re not hard to beat, but definitely, because there are actual clubs, recognition within the school, and I feel like people there are a lot more accepting of it too,” Moody said.

He also noted that a majority of the classroom at RCHS have “Safe Space” stickers on classroom doors, signifying that LGBTQ+ students are welcome in those rooms.

RCHS student Addie Waller ‘24 was unaware that Moody protests daily.“I support him [Moody]. If a person loves the same gender, they should have the right to do that and express themselves. I feel like the Valor decision wasn’t very accommodating for those coaches.

Moody encourages students to visit Valor for Change’s website, follow their social media accounts, and join him in protesting VCHS.

“Come stand with me.”