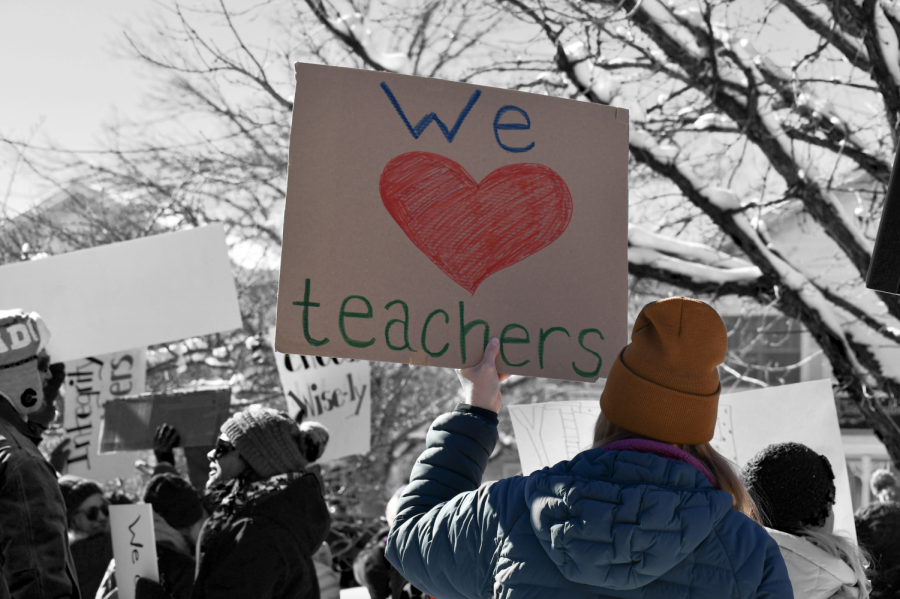 Protestors gather around the Wilcox Boardroom in opposition to the DCSD school board majority’s actions Feb. 3. This protest lasted from 1:00 p.m. to 3:00 p.m.

In a special meeting without public comment, Douglas County School District (DCSD) board members voted 4-3 to fire Superintendent Corey Wise without cause Feb. 4.

The newly-elected conservative school board directors were accused of conducting a clandestine meeting regarding the termination of employment for Superintendent Corey Wise. The remaining members of the board raised concerns about the conservative majority of directors violating Colorado Sunshine Laws.

“I believe it is healthy for Boards to have debate and deliberations where not everyone agrees, however, this needs to be done within the parameters of policies and quality processes. Unfortunately, when we stray from these policies and processes, it results in divisiveness and turmoil,” Director David Ray said.

The Colorado Sunshine Law for open meetings states that meetings consisting of two or more members of a public body, such as the school board, must be open to the public.

“The acting board members failed to consider the input of students, staff, or the community when considering this malicious initiative. These malevolent actions of the board set a poor example of leadership to the student population the board is sworn to serve,” the Student Advisory Group (SAG) leadership said in a collective email to the DCSD school board. “Not to mention, this sets a precedent for future leadership to dispose of a superintendent, simply because they disagree with their views or the timeframe in which they were hired.”

Concerns have been raised about a lack of transparency due to these alleged ‘closed-door’ meetings, raising suspicions throughout the community, especially what this means for teachers. Throughout the district, teachers have expressed concerns about how this may impact them.

“It makes me worried for myself and if there’s somebody in my class that doesn’t like what I’ve said, what I’ve done or what I have–they could take that and they could turn it against me and potentially try to get me fired as well,”  Psychology Teacher Katherine Lemeshewsky said.

There have not been specific factors provided from the school board majority to justify their reasoning for Wise’s ‘forced resignation’.

“It is my understanding that the Board Directors, who encouraged Mr. Wise to consider resigning, believe that different leadership is needed to take the school district in their envisioned direction,” Ray said.

Student activist Krish Kumar ‘22 believes these alleged actions taken by the board majority were politically charged, taken to further their own political agenda.

“It’s frustrating as a community member and student that our board is now comprised of four new individuals who do not respect the school district and the need to progress our district, but are more focused on pushing a certain political agenda,” Kumar said. “As a whole, I am just increasingly worried that rather than focusing on tangible items of action such as teacher pay, diversity and literacy rates, this new board is more worried about “parent choice” about masks and pushing a certain political agenda.”

“When you deal with this behind closed doors, it seems to undermine this whole ‘kids first thing’. It feels like their own agenda and possibly political for the boards’ own gain and not for the good of the whole,” Nicholson said.

The Culture of Individual Excellence and Inclusion resolution to the DCSD equity policy was passed in a 4-3 vote Jan. 25. The majority of board members voted to change an equity policy against the objections of 65 principals and central office staff, sparking controversy.

“Number one reason [I’m here] is equity. I think that it’s got to stay in our education policy. I’m here because I believe in equity and I believe in our students, that’s the number one reason,” English teacher Bryan McBride said. “Teachers need a voice. We can’t have people come in and decide that some students matter more than other students. We need to have a voice in the classroom, in our district, in what’s taught–and if we lose this, I’m afraid the next thing that’s gonna come down is them determining what books we can teach in our classrooms. We are not the enemy.”

Some students worry the board of education will not pursue proper channels of action in compliance with the Colorado Sunshine Laws and the equity policy will be vulnerable to changes.

“As a POC student, it is increasingly concerning that the new board has no respect or want to improve the environment of our district to enhance the experience of POC students,” Kumar said.

Kumar and Frankie Stroud ‘22 started Students4Teachers, an email-writing campaign to support Douglas County teachers. They took to Instagram, posting resources and email templates, encouraging peers to write to the conservative majority of board members, urging for change.

“As students, we want to take an active role in fighting for equitable and safe education so we are emailing school board members asking them to make changes to put students and teachers first,” Stroud said.

The emails advocate for accordance with Colorado Sunshine Laws, openness to listen to the concerns and requests of teachers, a review of the equity policy to ensure that students and teachers have a fair access to public education, and reaffirming DCSD COVID protocols to reflect the safety of the community and not personal choice.

Feb. 3, over 1,500 DCSD teachers participated in a ‘sick-out’, calling out sick in opposition to the board majority’s alleged ‘back-room meeting’ and concerns about the equity policy. This sick-out was comprised of around 45% of the 3,300 teachers employed at DCSD.

School was cancelled for the day due to the vast amount of teacher absences. Nearly a thousand teachers, parents, and students gathered around the DCSD headquarters in 25 degree weather from 1:00 p.m. to 3:00 p.m.

Kevin DiPasquale, the President of the Douglas County Federation, conversed with parents and community members earlier in the week, Jan. 31, before the revelation was dropped that the new board majority had possibly acted illegally in attempting to intimidate and fire Wise. In their meeting, teachers and union representatives decided that collective action was needed.

One of their main complaints was that DCSD has a policy of notifying employees if they are performing below standards, providing teachers with the option of either resigning or working with administration to elevate their performance within a certain time frame. Wise never received this opportunity.

“The decision was made to call attention to the school board, specifically the school board majority and that their actions are not acceptable and not okay as we move forward,” DiPasquale said.

“Our members expressed some concern over some of the dialogue occurring at board meetings having to do with the equity policy and working conditions,” DiPasquale said.

This initiative against alleged secret board member meetings placed a large emphasis on supporting teachers and their voices in the schools. Nearly a thousand community members showed up outside the DCSD headquarters in Castle Rock in support of Wise, opposition to allegedly conspiring board members, and support of a stronger equity policy.

As a parent, Nicholson supports engaging in even more action to hold the school board majority accountable.

“I’m behind if the teachers call for ‘don’t send your children to school’ in protest. Have at it, please go down and voice your opinion and be heard because I’m hoping that maybe there will be a big enough stink raised that they’ll wake up and realize their agenda is not really what people want,” Nicholson said.

Protestors were occasionally met with backlash. Counter-protestors would make an appearance across the street from the DCSD headquarters in Castle Rock, but were quickly shut down by the boos of the crowd. The majority of oncoming cars flashed a thumbs up or yelled in support, but multiple cars drove by the crowd of people holding a middle finger or a thumbs down out of their car window.

One car’s passengers booed the protestors and threw a large handful of salt and lemon seasoning packets at a group of Rock Canyon student protestors.

“Although there were people who disagreed with us and were being disruptive to the peace and positivity of our protest, things like salt packets being thrown at us made me more empowered to stand up for what I believed in,” Kumar said.

In response to the teacher sick-out and protest, the Board of Education held a special meeting Feb. 4 at 5:00 p.m. in the DCSD headquarters in Castle Rock to take action on the future direction of Wise in the district.

This meeting was closed to public comment, leading to community members voicing their frustrations on social media and through emails to Board of Education directors.

“To take an action on all-encompassing topics like future direction of the district without allowing the public to formally address us is reckless and negligent,” Ray said at the board meeting. “It goes against decades of practice where this board has always allowed for public comment prior to making any formal action.”

DCSD BOE President Mike Peterson responded that public comment is not required and that they already heard the voices of voters in Nov. 2021.

After a lengthy deliberation and tense exchanges, the seven board directors placed their votes, deciding Wise’s future in DCSD, or lack thereof.

As votes were cast, Director Becky Myers, a member of the conservative board majority, originally voted not to fire Wise, but Peterson asked again if she was voting for termination and she changed her vote to yes.

“Oh, can I go home?” Myers said after voting at the board meeting.

Myers’ vote resulted in a 4-3 vote to fire Wise.

As of Feb. 5, a petition to keep Wise in the superintendent’s seat and recall the conservative board majority garnered nearly 15,000 signatures.

Social media flooded with Instagram stories from students reposting their intentions of participating in a walk-out. Rock Canyon students are planning to hold a walk-out Feb. 7. at 1:10 p.m. with the mission of making the board reevaluate their decision to fire Wise without cause.

“The meeting was entirely disheartening and demonstrates putting politics before the well-being of kids and teachers. I am really upset about the future of our district, and I absolutely will be participating in the walkout,” student leader Allison Willner ’22 said.