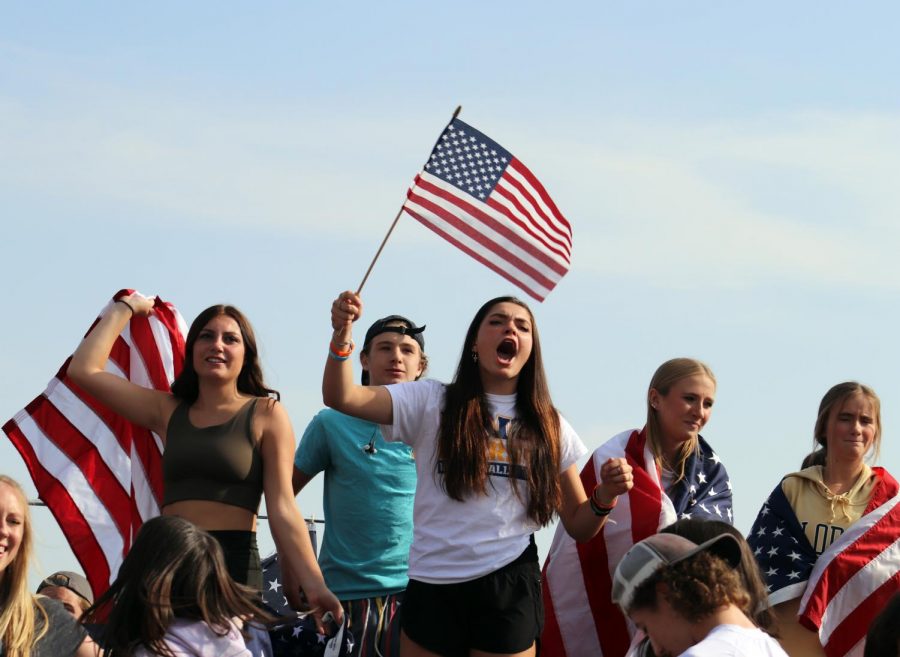 Kennedy Karbowski ‘24 chants in opposition to the mask mandate at the anti-mask walkout in the student parking lot Sept 1. Karbowski and other students protested the Tri-County Health Department’s decision that requires students to wear a mask in school in a walkout organized by the @dcsd_anti_masks Instagram account.

Students participated in a walkout to protest the newly implemented mask mandate Sept. 1.

Gallery|10 Photos
photo by Kira Zizzo
Kennedy Karbowski ‘24 chants in opposition to the mask mandate at the anti-mask walkout in the student parking lot Sept 1. Karbowski and other students protested the Tri-County Health Department’s decision that requires students to wear a mask in school in a walkout organized by the @dcsd_anti_masks Instagram account.

“We won’t wear it! We won’t wear it!” A crowd of students chant, bolstering their anti-mask expression by waving American flags and blaring music in the school parking lot. Students protested the implementation of a mask mandate from the Tri-County Health Department that requires students over two years old to wear masks at school.

“The mask mandate for schools will be put in place until January 1st, 2022 unless you spread the word, protest, and go against mask-wearing in schools. Let’s fight against having to wear masks every day for 8 hours again,” a post by @dcsd_anti_masks said.

“The reality is, we’ve been doing this for two years. I got vaccinated and they said that if we get vaccinated, we wouldn’t be masked up. They’re masking us up. It should be my conscious decision as a free American citizen if I wear a mask. If other people want to wear it, that’s cool, good for them, I respect that…respect what I want too,” Matt Belveal ‘22 said.

Student protestors advocated with the intent of bringing attention to their negative viewpoint of mask-wearing.

“We have First Amendment rights, everybody does. This shows how we have a voice. It seems like we never get heard and it also seems like this won’t get the same coverage as a BLM protest,” Andrew Woodring ‘22 said.

Other protestors questioned the value of masks, recalling last year’s combination of learning models: hybrid, in-person, and remote, which fluctuated due to COVID safety concerns.

“If they’re gonna make us wear masks, they might as well put us back in remote because there’s no point of wearing masks, they just hinder our efficiency of school. I hate masks,” Ethan Schuttler ‘24 said.

Some protestors were concerned that the mask mandate may lead to remote learning, eliminating opportunities to participate in school events, such as homecoming and spirit days Sept. 19-25.

We are kids and we should live our full high school experience and not be shut down because of a virus,” Kennedy Karbowski ‘24 said.

Karbowski also raised concerns about the possibility of mandatory vaccines for students.

“Even with our president saying that even if you get vaccinated, the kids who are vaccinated still have to wear a mask and this is going to lead to us having to have mandatory vaccines for school and that’s against our American rights to make us do something we don’t believe in,” Karbowski said.

Mason Vogel ‘24 was neutral about the mask-wearing controversy and decided to walk out of class for entertainment purposes.

“I’m just watching the protest because I think both sides are really funny. I think it’s funny that people are flipping off the protest and they’re yelling at each other,” Vogel said.

A crowd of pro-mask student protestors gathered near the school courtyard in opposition to the anti-mask protestors.

“I walked into school and instantly felt the division and lack of student body unity. Why can’t we come together and care about people? Why can’t we come together and make sure people feel safe? That is the kind of stuff we need to protest: unkindness and inconsiderate actions. I’m disappointed in humanity today. This [masks] isn’t oppression, it’s the world trying to put itself back together,” Mila Cox ‘22 said.

Opposition to the anti-mask walkout made a presence on social media, with dozens of Instagram account parodies of @dcsd_anti_masks appearing overnight, including @dcsd_anti_ed_sheeran, @dcsd_pro_barb_nation, @dcsd_anti_anti_masks, and @dcsd_anti_bathrooms.

“Bring a bucket of beans to school for you and your friends’ munching purposes. In a few short minutes, y’all will feel the need to fart. Create a human wall and simultaneously rip the cheese to prevent the protestors from going outside. They’ll be completely defenseless due to their lack of facemasks,” the @dcsd_anti_anti_masks account post said.

The @dcsd_pro_barb_ account created posts with masks edited onto rapper Nicki Minaj to encourage students to stay in school and wear a mask.

“We wanted to spread a positive and lighthearted message after the dcsd_anti_mask account was created. We want to spread a message that supports the mask mandate and to do it in a light-hearted manner through our favorite rapper,”@dcsd_pro_barb_nation administrators said. “There is a clear distinction between public health and politics and there should be no sides to a mask mandate, “both” sides need to agree that masks do help prevent COVID-19 transmission and protect our society. In the walkout, students were flying Trump flags and were using the mask mandate (that was put into place by TriCounty not even the federal government) to push a certain agenda that was clearly inappropriate for what the situation was at hand.”

“We started this because we thought it would take the attention away from the anti-mask protests. I think [masks] are a very odd thing to be upset about. In the richest district in Colorado, people are upset about their ‘rights being taken away’. It is very clear that no one really cares about stopping the entitlement of the anti-maskers, mainly because those in charge are also anti-maskers, so all we can do is make a joke out of it,” @dcsd_anti_ed_sheeran account administrators said.

Students like Elise Barton ‘22 were inspired to take the anti-Ed Sheeran movement to the anti-mask protest, detracting attention from anti-maskers.

“I heard about the anti-mask protest and was pretty uncomfortable with it because masks are needed to keep everyone safe. Then I heard about the anti-Ed Sheeran Instagram page and decided that I would protest for that cause. There are high-risk people everywhere including in my family that can get sick and die,” Elise Barton ‘22 said.

Mary Mead ‘22 used her social media platforms to post Instagram stories, voicing her frustrations and concerns with the anti-mask protest.

“I think that we are wearing masks only to help the general public and to provide safety to people and to take some work off of our healthcare workers’ hands because they do a lot for us and I’m just trying to keep the general population safe. I hope to let people know that they are extremely in the wrong.” Mead said.

Other students who opposed anti-mask protestors placed themselves directly into the anti-mask crowd. Diego Ellen ‘24, a transfer student from Costa Rica demonstrated his anti-Ed Sheeran and pro-mask position in the center of the anti-mask gathering.

“I came in with a joking mentality, but I felt that it was important to take a stand for what I believed in. I realized that there was nobody really talking about the issue and it was really upsetting how little kids understood,” Ellen said.

His initial motives were to highlight his opposition to anti-mask protestors by utilizing comedic methods, but Ellen was met with violent backlash.

“I like to believe that when you’re with a crowd, you tend to bring out some of the things that you don’t really believe in. There were some nice people who came up to me and said that they appreciated what I was doing, but I also felt slightly endangered,” Ellen said.

He is a part of the LGBTQ+ community and anti-mask protestors yelled homophobic slurs at him, threatening bodily harm.

“There were threats of beating me up. They were just swayed by the movement of the crowd and the power that the protest was bringing…I feel like there was a lot of animosity,” Ellen said.

An anti-mask protestor threw a cup of water with ice in Ellen’s face near the end of the protest.

“It got my mask all wet and dampened my voice in the protest, which was a little bit latent because it was at the end [of the protest], so I was able to keep on protesting, but it was really quiet,” Ellen said.

His “Stop Ed Sheeran” sign was ripped up by anti-mask protestors, but he noted that when the sign ripped, it made a heart shape.

“I feel like love wins in the end,” Ellen said.